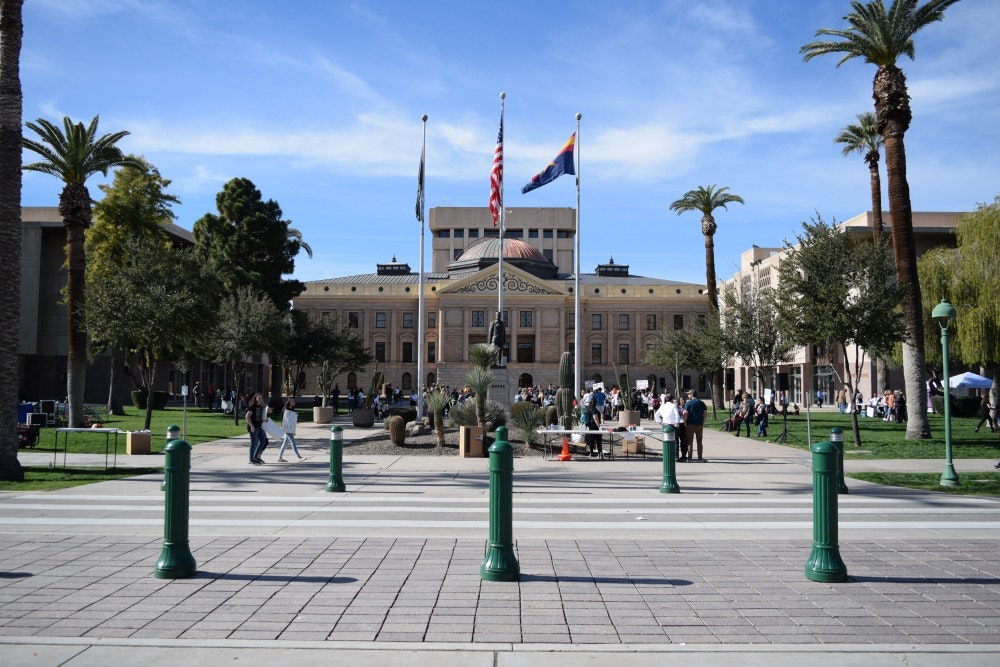 People walk past the Arizona State Capitol in Phoenix, Arizona, on Saturday, Jan. 19, 2019.

House Bill 2523 faced several roadblocks, with concerns from constituents about its motives and constitutionality

A contentious bill that would allow businesses to pay full-time students less than the state’s minimum wage was effectively killed in the Arizona Senate Rules Committee on Monday.

House Bill 2523, also called the Youth Employment Act, would have allowed employers to pay some workers the federal minimum wage of $7.25 per hour instead of the state's minimum of $11 per hour. The bill would have applied to full-time students under 22 years old who work for less than 20 hours a week.

The committee decided to add an amendment to the bill that would require a three-fourths vote of the state House and Senate for approval. With opposition expressed by the Arizona Democrats in the legislature, the bill is likely to fall short of the number of votes needed to pass.

In an emailed statement, Undergraduate Student Government Downtown president Aly Perkins said that USGD is relieved about the bill's failure to pass.

"I don’t think some elected officials understood how much this legislation would hurt college students, despite the hundreds who signed in against the bill and who sacrificed the time to speak out," Perkins said. "Today was not only a win for ASU students but for the state."

Senate staff attorney Chris Kleminich declared that the bill would contradict Proposition 206, which raised the state’s minimum wage for all Arizonans. Kleminich said the bill would be considered an amendment to the current proposition, and not a bill on its own.

The Arizona Constitution states that lawmakers are only allowed to make changes to a voter-approved proposition with a three-fourths vote of both the House and Senate.

Senate President Karen Fann said during the committee meeting that the bill would not pass to the full Senate for a vote given the slim chances it has of passing.

Lucien Roberson, an economics and political science sophomore who works a part-time minimum wage job off campus, said he’s glad the bill was killed because it would affect him directly. Though, he said, he's not satisfied with how far the bill made it through the legislature.

"It was 2016 that the original proposition passed, the fact that so quickly such a big majority of the Senate and House was looking the other direction kind of speaks to the character of some of the people representing us," Roberson said. "I don’t know if their intentions are in line with that of the people."

View the entire document with DocumentCloud

Rep. Travis Grantham (R-Gilbert) introduced the bill on Feb. 4, saying at a later hearing that it would help businesses afford to hire and train more students.

The bill faced many roadblocks as it made its way through the Senate, with concerns from labor organizations, students and lawmakers about its constitutionality.

Despite the obstacles the bill has faced, it is still backed by the conservative Goldwater Institute, which said it believes that high minimum wage bills are harmful to first-time workers and students.

Jon Riches, director of national litigation and general counsel for the Goldwater Institute, said the bill is constitutional and hopes the legislature tackles the issue of youth unemployment.

"We think it's unfortunate, and we'll see what happens on the floor of the Senate," Riches said. "It's still very good policy and we know that these laws hurt ... students the most."

But others maintain that if passed, the bill would do more harm than good to students, who they say often need to pay for their own expenses and cannot afford a cut in wages.

Cesar Aguilar, executive director of the Arizona Students' Association, said in a statement that the organization is thankful to the organizers and students who pressured their elected officials to take action against the bill.

"This bill could have cost many students at ASU, NAU, UA and the Arizona Community Colleges to drop out of college due to the high costs of tuition, fees, bills and food costs," Aguilar wrote.