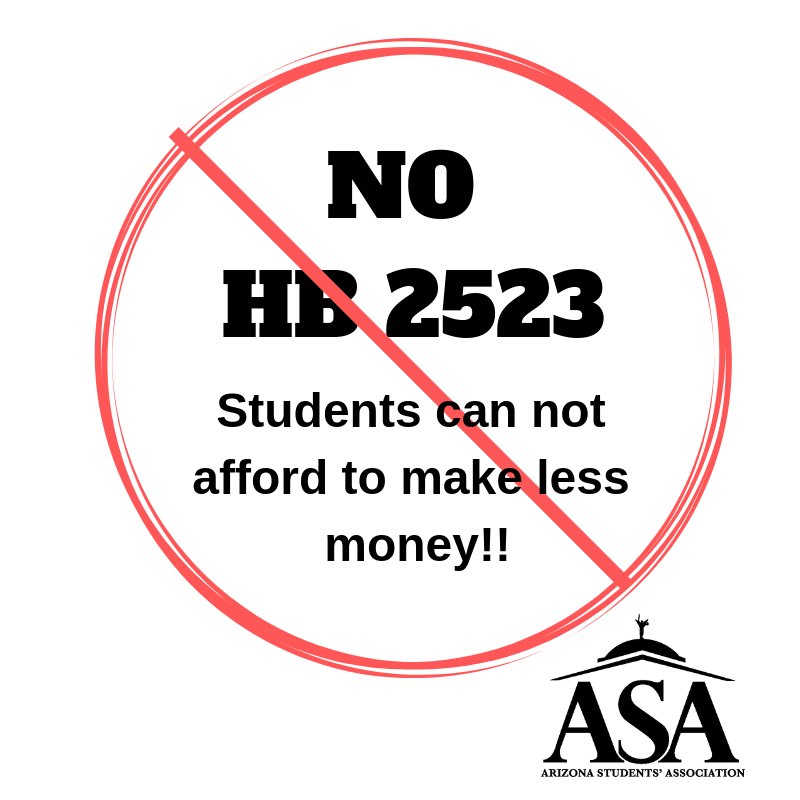 People walk past the Arizona State Capitol in Phoenix, Arizona, on Saturday, Jan. 19, 2019.

ASU students and local lawmakers welcomed a recent political roadblock facing a bill in the Arizona legislature that would allow businesses to pay students less than the state's minimum wage.

Jessica Carter, economics sophomore and treasurer of the Young Democratic Socialists of America at ASU, said she was glad that advocates were able to put a temporary halt on the bill, which she said disregards students’ rights.

“I think it’s good that these people came out and showed their opposition to the bill," Carter said. "It shows a strong statement to people who are going to vote for it that this bill is a bad idea and that there will be political repercussions for them if they go ahead with this.”

The Arizona Senate Commerce Committee held the bill on March 14 after a Republican legislator questioned whether the bill would discourage students from attending college. While the senate committee withdrew the bill from voting for the time being, it is unclear if the committee will hear it at a later date or refer it to another committee.

The temporary halt comes a month after the bill was introduced in the state House, a move that sparked widespread debate between labor advocates calling it discriminatory toward student workers and business groups saying it would decrease youth unemployment.

House Bill 2523, called the Youth Employment Act, would allow employers to pay workers the federal minimum wage of $7.25 per hour instead of the state's minimum of $11 per hour. The bill would apply to full-time students under 22 years old who work for less than 20 hours a week.

Lucien Roberson, an economics and political science sophomore, works a minimum wage job in Arizona and said the possibility of earning almost half of his current minimum wage would adversely affect him.

“The bill itself is honestly a travesty ... because I thought Arizona was moving in the right way to raise the minimum wage, but this was just a bit of a slap in the face to see it reverted so suddenly as well," Roberson said.

Cesar Aguilar, executive director of Arizona Students’ Association, said the organization's efforts in working with students to urge representatives to vote against the bill helped halt the bill.

The Arizona Students’ Association created a petition that gained over 1,000 signatures since it was posted on Feb. 28.

“I think they didn’t have the votes to move forward so they’re holding it up which is great news," Aguilar said. "At least on the senate side, they got our message that students are standing up and fighting against this bill."

The bill passed the House in February, but will need to pass a vote on the senate floor before it's sent to Gov. Doug Ducey for consideration.

The bill is mainly backed by the conservative Goldwater Institute, which asserts that the wage increases under Arizona's current minimum wage law will hurt students’ chances of finding a first-time job.

Jon Riches, director of national litigation and general counsel for the Goldwater Institute, referred to a study conducted by the University of Washington, which shows that businesses in Seattle prefer paying a high minimum wage to experienced workers instead of first-time workers.

“When we look at the studies, we know that really high minimum wage laws hurt the youngest and most inexperienced workers, oftentimes full-time students who are just looking for part-time work,” Riches said. “We’ve been looking for solutions to try and create as many job opportunities as possible for young workers that are just looking to get a start and build a career.”

Undergraduate Student Government Downtown emailed a statement to The State Press condemning the bill and the state legislature for refusing to invest in its students.

"HB 2523 would significantly hurt college students, especially those that need every penny earned to support themselves and their families," USGD said. "College students are key stakeholders in the state's economy, contributing $3 billion in 2017alone."

Tyler Pace (R-Mesa), the Republican senator who brought the bill into question, highlighted his concerns during the meeting that the bill would give an advantage to individuals who do not attend college full-time.

Students who are not attending college would earn the state's minimum wage while full-time students would not, Pace said. This could lead some students to decide not to attend college in order to earn more money, he said.

Carter said the bill puts these students at a disadvantage without considering how they will pay for their education.

“It's incredibly difficult to pay for college, make rent on time, afford books and with a 4 dollar pay cut it’ll only get harder for students,” she said. “It disincentivizes kids from coming to colleges too because the idea of making 4 dollars less while going to college will make people more likely to not want to go to college so they can make more money.”

Rep. Raquel Teran (D-Phoenix), who voted against the bill in the House, said she believes the power of young students led to the bill being held.

“It speaks to the power of the stories of these young students who are speaking up and talking about how this bill would affect their lives," Teran said. "That’s the most effective way of impacting lives, by sharing their stories."