Arizona Student Association takes the tuition fight to the legislature 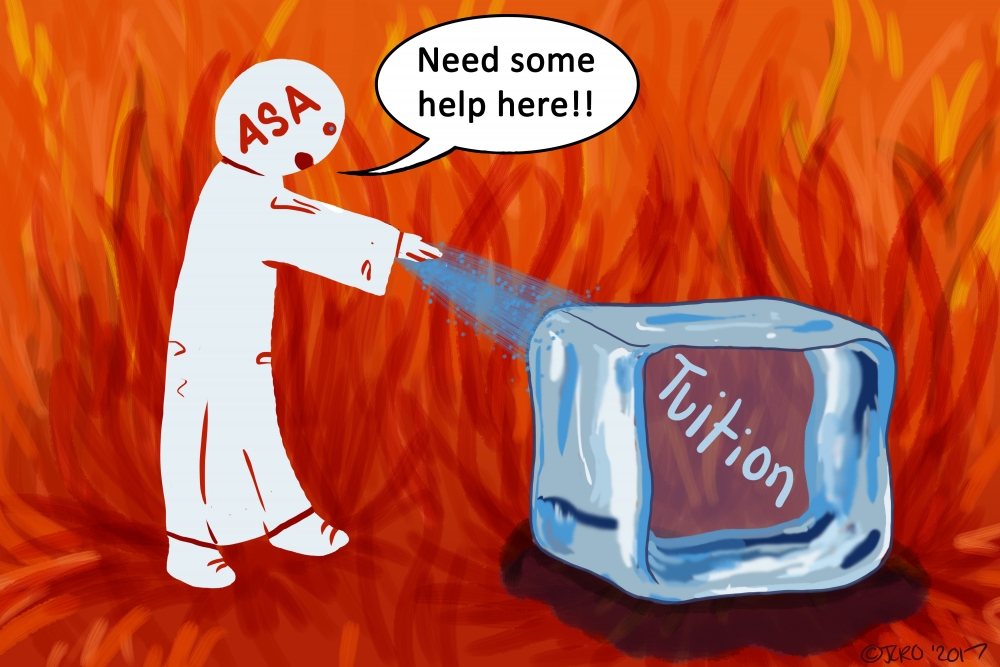 "The ASA is working on tuition freezes, but is poorly funded and needs more awareness. " Illustration published Thursday, April 20, 2017. Photo by Julianna Crozier | The State Press

Tuition raises will reduce the number of Arizonans able to attend ASU, directly violating the university's vision statement valorizing “not ... who we exclude, but rather ... who we include.”

Student organizations are good, but need to work with state-level organizations like the Arizona Student Association for maximum effect.

Students for a Democratic Society led a coalition calling for a tuition freeze from ASU. While they have targeted ASU President Michael Crow in preventing the tuition raises, ASA questions this tactic.

Instead, ASA is focused foremost on the governor’s budget, which also includes further attacks on state program funding. The association’s leadership contends that the Arizona Board of Regents has been raising tuition at all state universities due to continued lack of funding from the state.

While Ducey is taking measures to find ways to return some funding to universities this year, previous columns in The State Press have detailed the contentious nature of doing so on the backs of cities, leading to a likely fight between universities and their hosts.

On both the left and right, university administrations are receiving a fair amount of blame for tuition costs, but Inside Higher Ed points out that this popular viewpoint isn't nearly sufficient to explain current funding woes.

A solution to some funding issues lies there, but a streamlined budget for ASU, NAU and, yes, even our rivals in Tucson would still be vulnerable to education funding cuts from Ducey’s administration and the Arizona GOP.

Last year’s proposition 123, approved by a margin of 50.8 percent to 49.2 percent, capped K-12 education spending statewide at 50 percent of the state budget in exchange for immediate raises for Arizona teachers.

This sentiment makes it clear that what is happening at the Capitol is far larger than what is happening at Michael Crow’s office and ABOR. If the national GOP is considered anti-intellectual, the state GOP has managed to force even moderate Republican legislators like Sen. Worsley, who was previously expected to vote no, to vote for legislation cutting off the roots of basic public education.

While ASU needs pressure to allocate funding to student programs rather than, perhaps, Sun Devil Stadium renovations, these symbols of excessive spending by the university were poorly timed, rather than indicating spectacular decadence.

ASA has been off the radar after losing their funding from ABOR, however, after a lengthy legal battle they have received their funding again. Despite the lack of recent action, their links to ABOR represent an important link between all parties interested in restoring state funding.

ASA executive director Shayna Stevens says that the primary value in going after the state government is that while campus organizations have to rely on moral conversations, attacking the state budget has the backing of the state constitution.

“Our constitution states that higher education in the state of Arizona should be nearly free as possible," Stevens said. "That's up to interpretation, but when you base that off the average income of a student, we're nowhere close."

It is not that organizations like SDS and their coalition are doing anything wrong. Rather, it seems more effective to aim for the state legislature and executive.

President Crow’s solidarity would be a powerful symbolic victory, but his solidarity is less important than focusing more resources on those most responsible.

Organizing on campus needs to focus on the state government, rather than buying into the state’s argument and attacking the universities themselves.

The re-launched ASA provides at minimum a second prong that could improve efficacy of campus organizing, and at best leadership that student organizers need to tie them to students across Arizona.

If students want to freeze tuition raises, ASA is a necessary partner and likely the best leadership available.

Original Article can be found HERE.